Minute of the Kirk Session September 1919

…..it was resolved… to erect a suitable memorial within the Cathedral, and in order to have the whole matter fully gone into to call a meeting of the Congregation in the Cathedral on Wednesday 15 October.

Report by the war memorial committee to the congregation.

The War Memorial Committee now beg to report to the Congregation as follows; viz:-

The Committee have held five meetings and there have also been Meetings of a Sub-Committee to consider details of the Memorial.

The Committee unanimously came to the conclusion that the most suitable form of memorial would be a stained glass window in the Cathedral, ands a tablet recording the names of the fallen; and they estimated that to carry out this scheme in a manner worthy of the Cathedral and the many historical monuments already in that ancient building a sum of £100 would be required.

They resolved to issue an appeal to the members and others interested, and in response thereto they have to state that subscriptions to the amount of £905. 17s.11d., have been received. The expenses to date amount to £16.15s.9d., which leaves a net balance of £889.12s.2d. To this amount has to be added the interest accrued to 15th instant amounting to £19. 3s. 4d., so that the sum on hand at present amounts to £908 15s. 6d. and of this sum £905 is on deposit receipt. The committee desire to thank members of the congregation and others who subscribed for their generous response to the appeal.

In regard to the Memorial Window, the Committee have been fortunate in securing the services of Mr. Douglas Strachan, Edinburgh, who offered to design and execute the work for a sum not exceeding £600, if the cost was less the Committee would get the benefit of the difference. As to the Tablet the work of designing and placing it has been entrusted to Mr. Cromar Watt, Aberdeen, who was introduced to the Committee by Mr. Strachan, and the Tablet which is to be of marble with borders of gold mosaic and reed copper, built into a granite surround, is estimated to cost £285. The Tablet will shew the regiments, ranks, names and dates of death of the members of the Congregation who fell in the war. The window is to be placed in the one presently filled with clear glass on the south wall of the Cathedral with the tablet immediately underneath.

The Committee had before them a suggestion that a memorial might also be erected in memory of the late Mr. Kirk, Minister of the Second Charge who died of wounds received in France while serving as a Chaplain to the Forces. The suggestion was cordially approved and the Committee unanimously agreed to have as part of the scheme a granite table to be placed underneath the memorial tablet, the table to be specially dedicated to the memory of Mr. Kirk. The design for this has been prepared by Mr. Cromar Watt, and the estimated cost is £60 or therby.

The total estimated cost of the War Memorial is thus £945, which shews an apparent expenditure of about £36, but the excess is more apparent than real because a large part of the money subscribed will remain on deposit at interest for a considerable period and the deficit will thus gradually be made up.

While the committee do not intend to issue any further appeal in connection with the War Memorial, they will nevertheless be pleased to receive further subscriptions so as to ensure its proper completion, and, if possible, to have in hand a balance to form the nucleus of a fund to be ear marked for the future maintenance of the memorial and for any unforeseen contingencies.

The approval of the Heritors has been obtained to the scheme, and it is hoped that the Memorial, when completed will prove worthy of those connected with the congregation, who at the call of King and Country, left all that was dear to them, and fought and died in the War; and that like the venerable building in which it is to be erected, it will endure to the end. The Committee desire to express their most cordial thanks to Mr. Mackay for his services as Clerk and Treasurer, and to bear testimony to the very valuable assistance he has so willingly and frequently given in connection with the Memorial Scheme.

The Committee have had under consideration an application made to the Kirk Session by Principal Sir George Adam Smith on behalf of the Minister, Office bearers and others of the Old Aberdeen United Free Church to have names of the men connected with the United Free Church who fell in the war placed along with those on the Cathedral Roll of Honour.

17 February 1924. The moderator suggested that on the occasion of the unveiling of the joint War memorial at the Cathedral on the ninth day of March 1924 at 2.30pm the congregation be asked to attend this ceremony at the sister church.

What Scotland was saved from: Lessons and Inspiration.

With a beautiful and impressive service the War memorial of St Machar’s Cathedral, Old Aberdeen was unveiled and dedicated yesterday afternoon. The memorial is a stained glass window in the south aisle with the names of the fallen belonging to the Cathedral and to Old Aberdeen United Free Church on marble tablets beneath, and a stone table in memory of the two ministers of the Cathedral who served and suffered in the war – The Rev. James Kirk M.C. and the Rev. Dr. Bruce McEwen. In the chief lights of the window are the figures of St Michael (centre), Fortititude (left) and Justice (right). Below on the left and right are scenes of the soldiers in action and in repose – men asleep in the trench, with the sentry peering into No-Man’s land; and in the centre ships of war in the sea off Bridge of Don. The unveiling was performed by General Sir George F. Milne G.C.M.G, K.C.B., D.S.O., LL.D., of the Eastern command, a native of Aberdeen who commanded the British Salonika Forces and the Army of the Black Sea during the war.

Within the venerable building, brightened by the clear sunshine of a lovely spring day, gathered a large congregation. As the worshippers assembled music which at once brought them into the atmosphere of the service was played by Mr. M.M.Gilchrist. Very fittingly the organist had selected the works of British, French and Belgian composers opening with the Lamentations of Guilmant which was followed by Parry’s beautiful choral prelude on the tune “Communion” to which the 35th Paraphrase is sung, and Cesar Franck’s inspiring Piece Heroique  and concluding with Bairstow’s quiet and reassuring Elegy.

“Counted not their lives dear”

Softly came the comforting words of the introit, Newnham’s “And God shall wipe away all tears” finely sung by a quartette in the west gallery of the Cathedral and supplemented by the choir with touching effect. The congregation joined in the familiar lines of the 23rd Psalm to the tune “Wiltshire “and then Dr MacGilchrist engaged in prayer giving thanks for the wonderful victory bestowed upon us and our allies.

The roll of honour

With the thoughts of loved ones, old comrades-in-arms and friends blended the bugle notes of “The Last Post” sounded outside by Drummer Dawson D.C.M., Gordon Highlanders and after these had died away there was a solemn moment of silent remembrance, closed gently by the singing of “Sleep thy last sleep” (Carrol) by the choir.

The sweet plaintive strains of “The Flowers of the Forest” played on the organ formed a beautiful prelude to the unveiling ceremony, the congregation rising as the officiating clergy, General Milne, Mr. W.F. Webster, joint convener of the Memorial Committee and ex Baillie Beveridge, convener of the Standing Committee of the heritors, proceeded up the centre aisle to the memorial window, near which stood the B.B. Guard of Honour.

General Milne drew aside the draping from the window and Dr MacGilchrist spoke the sentence of dedication:-

“To the glory of God and for the perpetual memory of our brave sons and brothers, who freely gave their lives in our defense, these memorials are dedicated in the name of the Father and of the son and of the Holy Ghost.”

(After General Milne’s Address), to the well known tune “St Asaph” the congregation joined in the 35th Paraphrase, “How bright these glorious spirits shine” and after the benediction and the choral “Amen” the National Anthem was sung.

Again the bugle sounded – the “Reveille” with its note of hope this time – and the service was over.

As the congregation filed past the memorial, the colouring of the window illumined by the brilliant sunlight, sprigs of laurel – the emblem of victory and thanksgiving – were handed by members of the B.B. to relatives of the fallen.

Two wreaths of laurel were laid at the memorial on behalf of the congregations of the Cathedral and the Old Aberdeen U.F. Church. Among those who sent private wreaths were Mrs. Kirk and Mrs. McEwen, the widows of the two ministers commemorated by the memorial table.

After leaving the Cathedral General Milne inspected the Boys’ Brigade at the Chanonry. 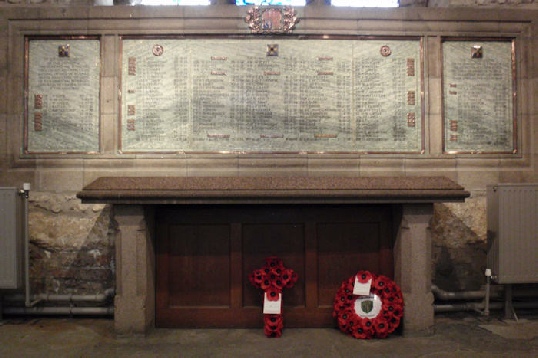